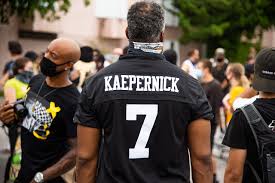 Having been a sportswriter my entire professional career, I have had a ringside seat to watch African American athletes be treated as nothing more than “entertainers” for rich professional sports owners or mega-bucks college athletic programs.

It was only a matter of time before the pushback to oppression now being seen in demonstrations across the country and around the globe would make its way into the stadiums and arenas where this generation of Black athletes performs.

Now, they too are saying, “I can’t breathe.” Enough is enough.

NBA players only recently decided to resume the league’s playoffs after threatening to end the season in protest over the police shooting of 29-year-old Jacob Blake in Kenosha. NFL players followed suit by boycotting practice sessions this week; America’s beloved NFL season is suddenly up in the air. And many college players are declaring that their health is more important than satisfying a rabid football fan base in the midst of a pandemic.

Wake up America. The floodlights have lit up the dark specter of racial injustice.

As a Black sportswriter from the South in the 80’s and 90’s, I’ve had my own up-close encounters with racism.

There was the little old white lady in St. Louis who pushed her half-eaten shrimp shells on my plate, mistaking me for the hotel’s “help” instead of a guest at the same place she was staying. And the guy at a golf club in Birmingham, Ala., who yelled to ask me if “Sadie was still in the kitchen?” as I waited to interview players on their way back to the clubhouse after a tournament.

And let’s not even mention the numerous cabbies I tried to hail on an Indianapolis street corner for more than an hour in frigid weather, all of whom passed me by.

For centuries now, Black people in this country have had to wake up every morning and deal with one thing: We were brought here to never be anything more than slaves to white America.

Slaves and entertainers is what a great majority of white people still believe we are. Nothing more, and in too many cases, a lot less.

The people who cheer for the jersey Black athletes wear are the same people who would cringe if that player walked toward them on a downtown street. Or if any other young Black man approached them wearing that same jersey.

For me, a direct descendant of the last load of enslaved people illegally brought to America 160 years ago aboard Clotilda — all to settle a bet between two wealthy white men — racism is clearer now than it’s ever been.

And it hurts more, too.

It hurts to see an innocent Black woman, a first responder, killed by cops while lying in her own bed.

It hurts to see a Black jogger chased down and killed by two white men all because he was running in what they deemed was the “wrong neighborhood.”

It hurts to see police shoot a Black man in the back seven times in front of his young sons just because he was attempting to enter his vehicle.

It hurts to see a Black man choked to death by a white policeman for … nobody still knows why.

If you were a Black athlete, would you continue to entertain a largely white audience that only looks past the color of your skin because you can run and jump and catch and throw for the TEAM they love?

Of course you wouldn’t.

If Colin Kaepernick had played any position other than quarterback, his taking a knee during the national anthem to bring attention to racial injustice might very well have gone largely unnoticed. But because he was the quarterback, the face of the San Francisco 49er’s franchise, he became that runaway slave who needed to be punished so everybody else would fall in line.

And now, Black athletes across this country are taking a stand against racial inequality that even their white teammates, coaches and some owners agree must be addressed for the good of the country.

So, what’s the next step?

That’s for America to figure out.

And it’s the 4th quarter. Time is running out….